Lucky to have Ben Bell visit from Nanbu Bijin via Arkansas! We drank our Sake, his Sake…lots of fun! Enjoy this short video of the two of us talking about Sake and the American market

There are many methods detailed online and in books showing you how to make Sake at home. Almost all of them attempt to replicate large scale Japanese brewing on a very small scale. However, much like baking, brewing doesn’t always scale exactly as batches get much larger. A tank in a small scale brewery in Japan is […]

this post is totally for the brewing geeks out there. when faced with the job of growing our shubo in a small space, we looked at self contained systems but ultimately settled on constructing one from standard components. it turned out pretty well; the ability to not open the tank to heat or cool, or […]

although we are still a very small brewery that has yet to launch its Sake in New England, we are using good scientific methods to the best of our abilities to keep our Sake high quality and consistent. here is a short video on the analysis that we do.

I was filtering some small batch Sake today and I realized that Sake, which is often depicted as clear and pure, is never really that. It is true, you can use lots of charcoal filtration to strip out color but real Sake has color from a variety of sources.

A few weeks ago I was extremely lucky to spend time with a visiting Sake Brewery owner/brewer; Mr. Ogawahara from Shinkame Shuzo in Saitama. Mr. Ogawahara was in Boston to investigate the possibility of selling his Sake in the U.S. The challenge for him is that his Sake has to be served properly warmed. His […]

I get a lot of questions from homebrewers about the best way to separate the solids from the finished Sake in moromi. We needed to build a small press here for R/D purposes and I found it relatively easy and great to use. I hope this helps some of you in your homebrewing Sake adventures!

I’m asked a lot about how to make Sake batch recipes. Here is a video on that subject which should help get you started on understanding how a batch of Sake is constructed. For an link to a standard Shikomi Haigo for Sake, click here: http://bit.ly/1wwJ6tj

posting some photos with our filtration set-up in the background caused some readers to ask questions about water and its role in Sake brewing – here is a short video on the subject.

sorry for the length of this video, I just love tenugui that much! It is interesting to note that this is the first one of these videos that I have ever edited or added photos to, easier than I thought to do. Enjoy. 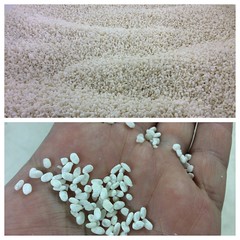