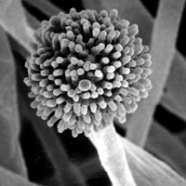 While waiting for our first test batch to finish, I had an amazing opportunity to do some analysis on the Koji I grew. Normally this would be very difficult but I have friends in very geeky places!

I called my friend Dr. Benjamin Wolfe at the Harvard microbiology labs. Not just any microbiologist, Benjamin studies cool stuff like cheese microbes and has been a great source for education on food microbiology in the Boston area. In addition to creating a lot of awareness about food microbes, he is one half of the dynamic duo (with Chef Scott Jones) that write the great Chefology column for the Boston Globe – covering the intersection of food and science.

Taking my Koji to the lab, we started by trying to slice a tiny section from a single grain (as difficult as it sounds) and looking at the section under a microscope. What we found was a huge mass of Koji growing on the surface of the rice; however since the Koji had worked in the Sake batch I knew that to be the case. 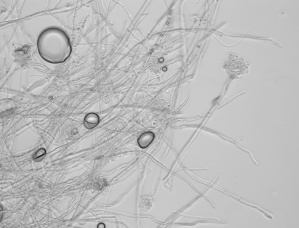 It was amazing to see whole Koji fungi like the one above that I had grown from a spore, kind of a microscopic garden plot. The Koji were just like the pictures in my brewing books, a long stalk with a head called a conidiophore. With that initial look completed I had a purpose for this analysis and visit; I wanted to see if I was sucessful in growing the Koji into the grain of rice and not just on the surface. In my previous Koji post I talked about regulating moisture in the rice to get the Koji to grow its hypae (roots) deep into the grain; this is one of the hallmarks of good Koji for high quality Sake. You can clearly see Koji gowth of the outside of the rice without a microscope (the rice is white and fuzzy); however, you need a microscope to tell if the Koji is burrowing its hypae deep inside the grain. 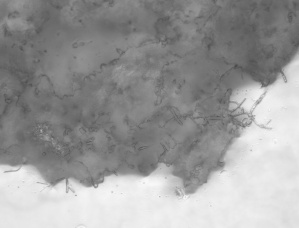 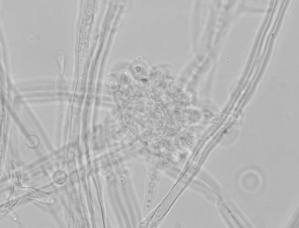 Huge thanks to Dr. Benjamin Wolfe and all of the folks over at Harvard MSI for being supportive and excited in the work that I am doing to bring Sake and it’s microbes to the public!