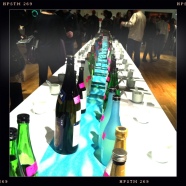 Every year I make sure to check out as many Sake events as I can, but I make it a point never to miss the Joy of Sake tasting in NYC every fall. This event presents over 300 Sake and a variety of food from well known New York restaurants. Working in the beer world, I am used to large beer festivals with multiple sessions spanning 2 days; however the Joy of Sake is all on one night. It is a little surprising to me that this event would not be done in a “beer festival” fashion, although having it on one night it certainly adds to the exclusive feel.

Four of us from Boston decided to make the trek down to NYC and, although we were only spending one night in the city, we were determined to pack in a much Sake-related fun as we could! Here is a recap of our night, assembled from multiple iPhone users 🙂

The Joy of Sake venue this year was The Altman Building, a historic carriage house in Chelsea. The large doors and windows opened right on to the street, giving you a welcome feeling and lending an open-air quality to the room inside.

Just inside the door was a greeting party providing you with your first Sake of the night, as well as several tables where you could grab official Joy of Sake ceramic cups for a small fee. One of the aspects that I have always liked about the Joy of Sake is that they allow you to bring your own glassware — something I recommend taking advantage of, since they only provide small plastic cups.

Over the next three hours we tasted some great Sake and sampled some creative food. The serving system for the JOS is very well done.  A large ceramic cup holds some Sake from the bottle behind it; in the cup is a pipette allowing you choose the volume that you would like to taste. The Sake is arranged on long tables, loosely grouped into grades, Daiginjo, Ginjo etc. This creates a great flow in the room and at no time did I feel crowded, nor did I have to wait for Sake.

It is easy to focus on the great food and Sake, but the Joy of Sake event also attracts a large crowd of very cool people. During my night, I rubbed elbows with pilots, executives from Pepsi, brewers, chefs, bar owners, one guy from the comics industry, a really laid back actress, ex-pats and a cast of assorted characters that was reminiscent of a Sake drenched Canterbury Tales.

Afterwards we had reservations at Sakagura, an upscale Japanese izakaya. I have been wanting to dine at Sakagura for years given their reputation for skillfully executed Japanese food and a huge Sake list. We were made to feel welcome by general manager Yukie Hashimoto and her great staff the second we walked in the door and were treated extremely well all night. The food at Sakagura is made to be shared amongst friends and to pair well with the dizzying array of Sake on their menu. Although the lighting was dim and prevented some photos of the food, I can assure you that everything was spectacular with some stand-out favorites being the pork belly (buta no kakuni), beef tongue (gyutan) and a silky half cooked egg in broth (onsen tamago).

Sake presentation at Sakagura is very well done. After navigating the large Sake menu, I ordered two Sake to start our meal off on the right foot. Both Sake arrived at the table in separate iced containers and each one had its own glassware to match; either the brewery or the style. This attention to detail could be glimpsed in the Sake as well as the food, giving you an idea of the pride that Sakagura takes in their service.

The last order of the night at Sakagura is at 12:45am, but luckily I know a little izakaya nearby that is open until 3:00am. With one more bottle of Sake and a few more snacks at Restaurant Riki to send us on our way, we happily returned to our hotel at 3:30am with a great sense of accomplishment. Being away from Boston for only 36 hours, we truly managed a fantastic night of world-class Sake, amazing food and fantastic friends.